REFLECTIONS FROM A MODERN WINDOW
Video and Sculpture by Stephen Hennessy 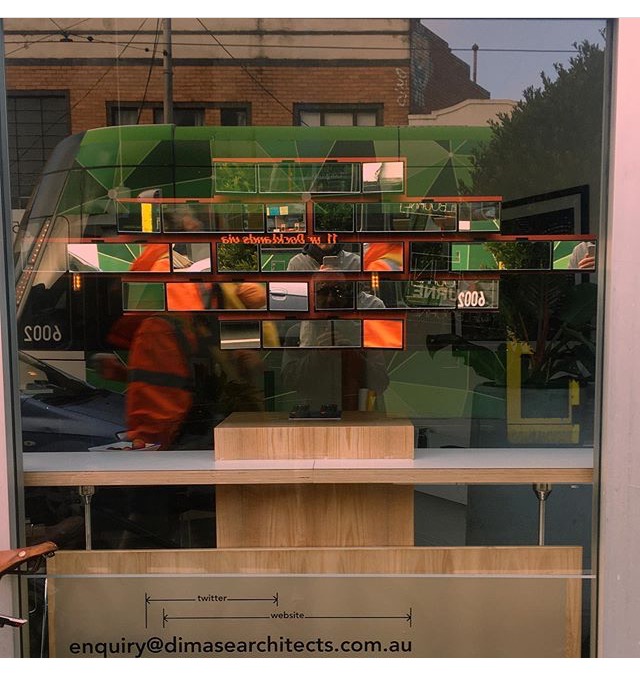 Reflections from a Modern Window…

I decided to take a tram down St Georges Road to scope the scene; the shopfront gallery there in their neighbourhood shopping strip. I imagined creating something situational, related to the place, factual and fictional all at once.

The virus had pretty much evacuated the street and inside a couple of architects were doing their bit still worrying about the built environment. In this time of too much reflection, I was looking for some action. Urban photography always gives more than you bargain for. In my case, ten minutes was all I needed to make hay out on the abandoned pavement.

I have long been interested in the shifting qualities of light that windows present and here we have a prime example of a glazed façade registering every passing movement and shift in daylight. The shopfront can be refigured as a grand reflector.

For this exhibition, I have made some new work to combine with a mirror sculpture and other devices (monitors) to bring you some urban rhythms based on window glass and the surprising wavelengths it yields. What passes gets involved; becomes the substance I was searching out. The window registers light and bounces back images. Reflections are part of a story so momentary that they escape the formal stillness of photography. Scores of repeated movements constantly graze the surface. Urban grit is not just pavement, bricks and mortar but the play of light and time – retreating and forwarding, stuttering and jumping. What I have here are primitive animations on a spectrum of no tech to low tech. Basic effects are applied to turn back time; repeat the moment causing a quick step and jolt, giving you a chance to see reflection in action.

I have reprised a sculpture piece from my 'Pieces for a Modern Wall' sculpture series (2004-2007) and repurposed it in this 'Piece for a Modern Window' situation. The mirror sculpture behaves like the video pieces in the way it fragments and splits what you perceive as reality. 'Triple angle spangle' is centred on the main shopfront window. Out on the street, if you happen to pass by on your fitness walk, you will see the shopping strip reconfigured as chopped up bits. Small angled mirrors bring in fragments of the adjacent street and repackage it as glimpses that do not make a full picture. Bits of the street are now items that flash and phantoms of passing traffic and the moving sun. As you move slightly the whole scene changes. Foot traffic and cars create linear reflection patterns and slippages.

Two monitors to the left and right play out the 10 minutes I spent out front rebounded and played again the video images form dance-like routines. These screens also connect you to the city – back to Flinders St. From Flinders Street I shot Hosier Lane, famous for street art aplomb and recent paint bomb. At the time of animation, the lane was being serviced while the congregation shuffled about.

I was interested in the small steps and repeated action that comes with this pilgrimage. Again, these moments are extended while time is held constant by the truck blinkers. White car and red car underscore the people movement and define the back and front of the lane. This piece makes a self-contained choreography from a single shot. The loop and fade take you right back and forth in a back beat you cannot lose.

'Deep space one and two' plays with long perspectives of north and south from North Fitzroy. By making sharp abutments of left and right views, the resultant pointy collage laughs at the actual flat linear nature of the North Fitzroy shopping strip. The collision of left and right long views culminates at the front door of the gallery. At the deep ends of the image, if you care to squint, a man waves mechanically and a couple jitter back and forth on the spot. So, we have a suspended space rendered in forced perspective in order to fabricate a drama of the empty street.

'Big tram bounce and boogie' is another animated photo collage using window reflection as a plausible but fictional movement event taking in the passing tram and elasticizing its arrival and departure. The dramatization turns the scene into a directional push and pull between north and south, suburb and city. The artist stands frozen like an Easter Island statue as the big vehicle engages in a rhythmic swipe back and forth across the surface of the shopfront. If you look carefully you will see the little finger of the frozen artist twitch the moment the shot was taken. The previous artist’s (Simon Linardi) sculpture in the window pieces are dragged into a new context…acting as bright spatial markers as a long song and dance routine unfurls – the tram bounces and slides behind a preposterous topiary ball big enough to disguise the switcheroo north – south commotion.

For 'Blue car - white car - cha cha', the inside of the gallery is invited to dance a passing car cha-cha. The meeting zone table is jolted, chairs are pushed back as the chance meeting of a white car and a blue car oscillate and stream without going far. The dance of cause and effect upends the juxtaposition of two similar images.

Reflections in the picture glass of a Melbourne cityscape photograph are perforated as the local cars punch through. The previous sculpture in the gallery window and a parked car across the road again act as still points in this modest animation. The illusion here contained within the picture frame, is a direct result of double reflection through the shop glazing and off the picture glass.

I hope reading this takes no more than ten minutes and that the loop and bounce duration of these pieces for a modern window stays with you awhile. Over the course of the show, thousands of reflections will slide by the shopfront and the city will be made over in all the chance repetitions of daily life sadly missing in this time of crisis.

As the city opens up again, all these reflections will submerge again; glazed over again and again as the crowded street moves. We maybe too busy to notice the amazing parallel optical world celebrated in these works.

With special thanks to Sian Tjia Hennessy for video format production.


Following images: Weekend viewers taking in my installation at 'Shopfront', DiMase Architects, 342 St Georges Road, North Fitzroy. On view day and night; mirror sculpture and video sequence looping and bouncing, 'Reflections from a Modern Window', on view until May 27th. 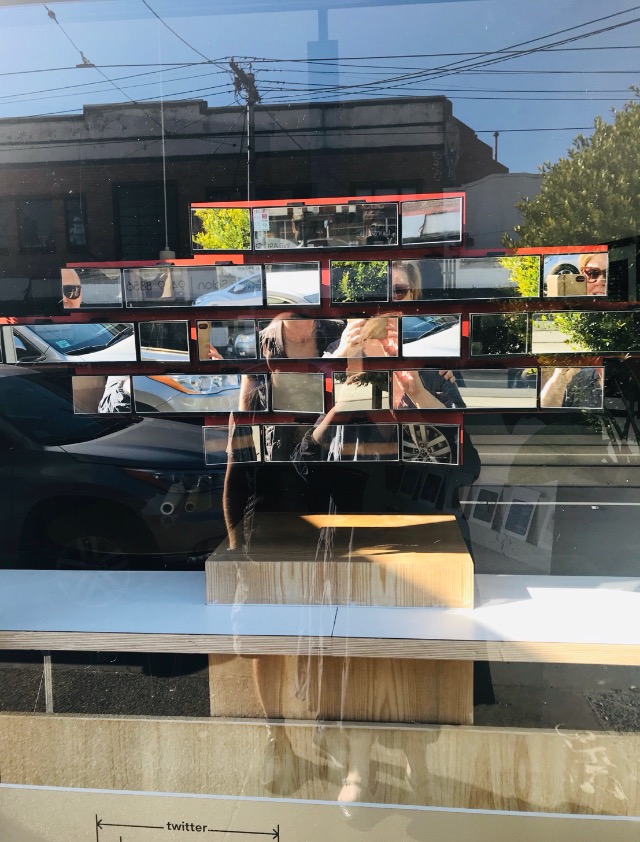 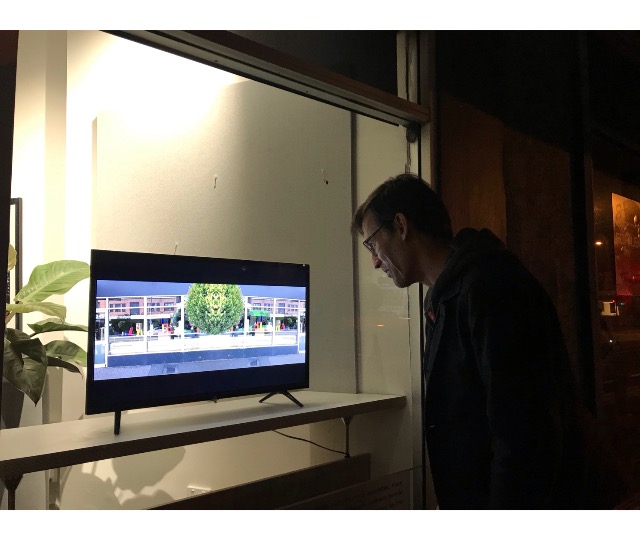 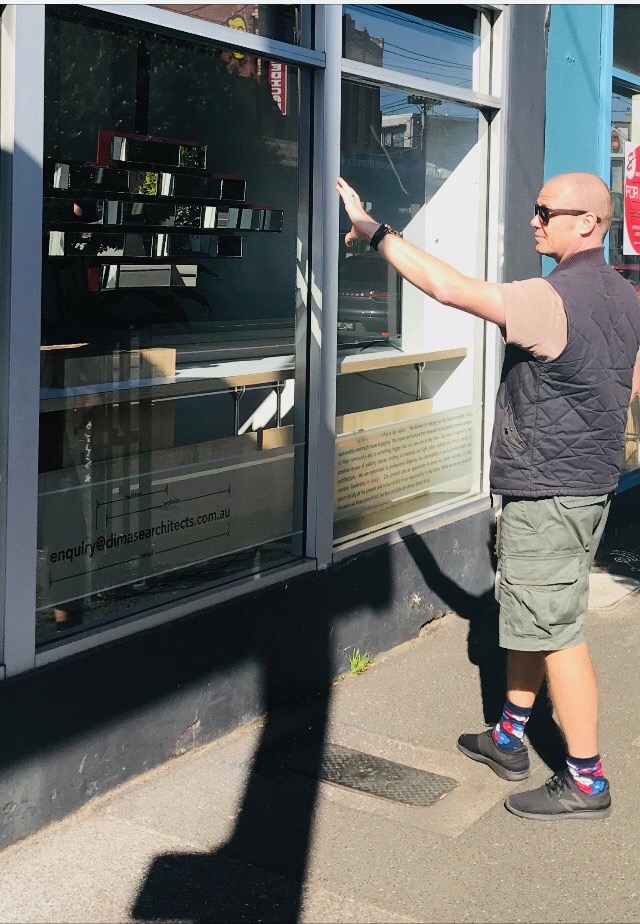